In Orange County, DUI arrests are often made at DUI or sobriety checkpoints. At a DUI checkpoint police will randomly stop vehicles to check the sobriety of the drivers. They are usually set up at times and places where police expect to encounter many drivers who have been drinking.

Requirements of a DUI Checkpoint

There are specific rules governing the publication and operation of checkpoints. If the police don’t comply with these rules then your Huntington Beach DUI attorney can be successfully defend your case. A lawful DUI checkpoint must comply with the following requirements:

The Fourth Amendment of the United States Constitution prohibits unreasonable searches of citizens. This means that the police aren’t allowed to stop you without probable cause to believe that you have broken the law. However, the United States Supreme Court ruled in Michigan v. Sitz that there is an exception to the Fourth Amendment where DUI checkpoints are concerned. The Court reasoned that the intrusion of liberty imposed by the checkpoint was slight as weighed against the protection of public safety  by deterring and catching drunk drivers. Thus, the court 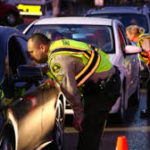 held that DUI checkpoints are Constitutionally permissible so long as certain criteria were met to ensure the limited intrusion of a DUI checkpoint.
In 1987 the California Supreme Court enumerated the criteria necessary to make a DUI checkpoint legal in Ingersol v. Palmer. The eight factors listed above come directly from Ingersol. Thus, non-compliance with the Ingersol factors above will give rise to a Constitutional challenge by your Huntington Beach DUI lawyer to any DUI arrest resulting from a DUI checkpoint.

At The Law Office of EJ Stopyro we offer a free and confidential telephonic case review and consultation. Call us today at (949) 278-6353. EJ will be happy to explain the court process and help you explore your options.